We all want to create social content that ends up on Twitter’s trending leaderboard. That is one of the many reasons why we create engaging content and decipher the cryptic insights on which images deliver better engagement, reach and impressions on a daily basis. Like many other companies, I am a fan of utilizing #MotivationalMonday, #ThrowbackThursday, and many of the other hashtags that drive viewership. Especially with holidays just around the corner, you want to set high benchmarks for selling your brands products and getting as much traffic as you can to your website and social media platforms.

Maybe your holiday goal is to recreate a memorable social media campaign, similar to the Oreo “you can dunk in the dark” Super Bowl blackout commercial that went live on Twitter and was an immediate trending sensation. However, the truth of the matter is that not everyone has $5.4 billion to spend on Super Bowl ads.

So how do you create a killer social media campaign that is successful? First, you have to define what success means to your company. Is your goal to drive brand awareness, engagement, donations, or follows? I’ll jump into answering those questions shortly, but I would like to preface that not every social media campaign has to be a video or a TV ad, the power of social media is getting the right content, in front of the right people, at the right time.

Not every social media campaign has to be a video or a TV ad, the power of social media is getting the right content, in front of the right people, at the right time. @SingWeist #SocialMedia #ContentMarketing Click To Tweet

Yes, it is essential to have a detailed day-in and day-out social media marketing strategy, but it is not the same as a social campaign. A campaign has a definitive start and end date. With a particular set timeline, a campaign usually revolves around an event, promotion, product launch, or convention that your company would like to highlight (i.e., March of Dimes, Breast Cancer Awareness Month, Comic-Con, new iPhone release).

However, you cannot start a campaign without setting goals. How do you achieve a successful social media campaign if you have nothing to strive to accomplish? Whether it be a fundraiser, promoting ticket sales or sign-ups, or brand awareness of the new product, each campaign is strategic on what the goals and objectives are. Work backward on your campaign timeline. If you know when you would launch your campaign, then you can figure out how many weeks of promotion you would like to include, then brainstorm and execute what the imagery and messaging will be. Moreover, from there, you will be able to formulate how much time you will need to create the assets required for your campaign launch properly.

Successful campaigns that perform better are ones with a clear message.

Dove created an incredible beauty campaign that featured women discussing #BeautyBias and videos showcasing what real beauty means to them. In the following tear-jerker campaign, women in Real Beauty Sketches describe how they see themselves to an artist, who draws through their depiction of their features, then he brings a random encounter who describes the same woman after meeting her. The artist puts the two sketches side by side, and each woman realizes how critical they are of their features. While some woman viewed their features as flaws, others saw as beautiful.

The campaign executes a clear message on how we portray ourselves and how we should feel comfortable and beautiful in our skin. Since Dove’s mission is to “ensure the next generation grows up enjoying a positive relationship with the way they look – helping girls to raise their self-esteem and realize their full potential,” they were able to communicate their message effectively through the campaign. Dove’s message was concise, which made their campaign exceptionally relatable and successful.

So, how do you set up a social media campaign?

You have to be clear with what your mission and objectives are. Know who your audience is and what their interests are. Dove created a campaign that featured women because they know that the majority of their demographic is women, while Oreo was tailoring their messaging to the masses.

Whether you’re offering food, product, or services, understand who your target demographic is. This is an excellent opportunity to listen to the feedback of your fans and followers. For example, Denny created an interactive tweet that asked followers to participate in a meme that required them to zoom-in on the small text. 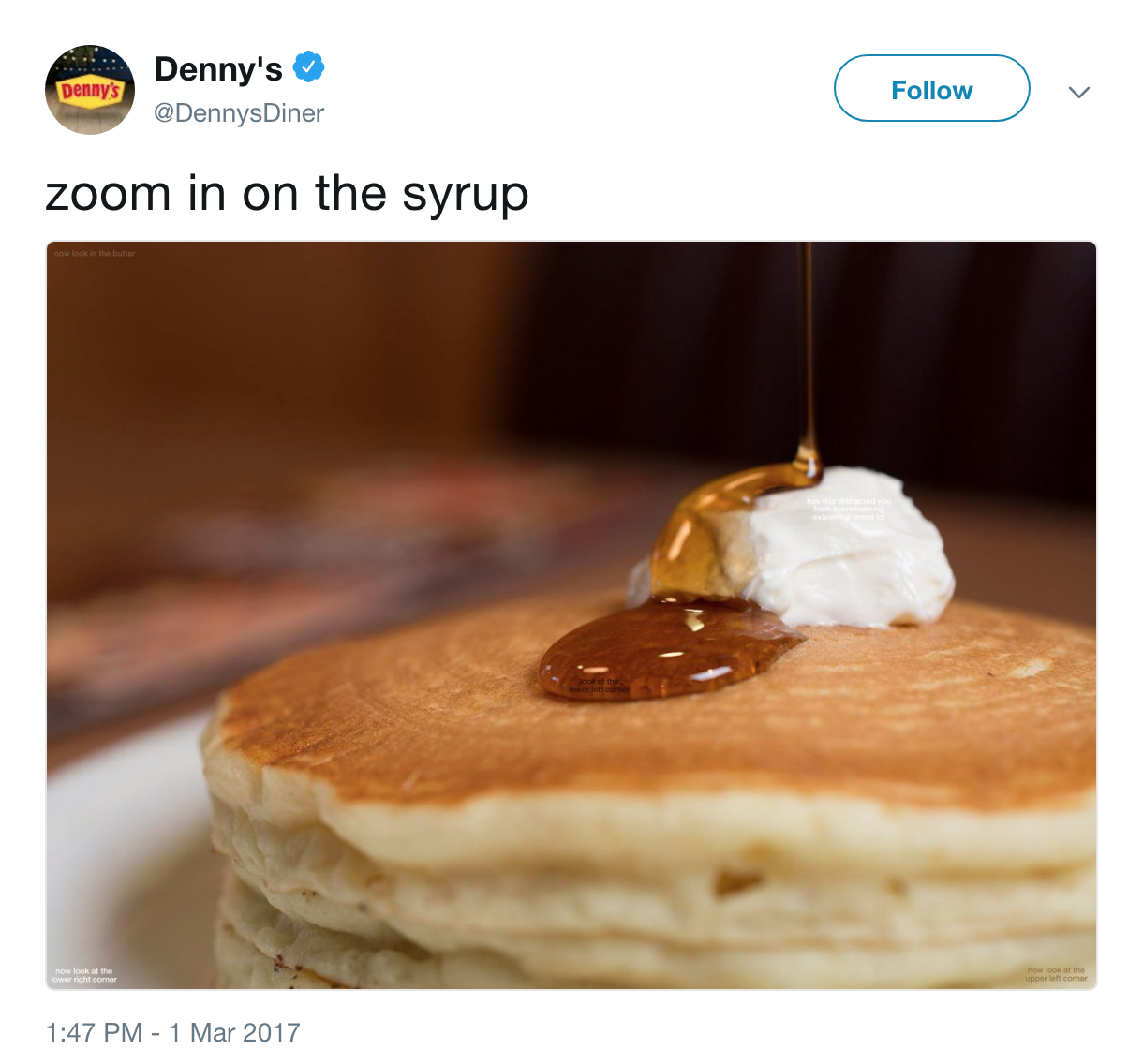 Sure this photo might look tasty, but it is not comparable to some of the delectable sweets and foodie pics we see on Instagram. So, what made this tweet receive over 234K retweets? It was smart and relevant. They engaged with their audience and sent tweets back like “if you zoom in on the heart tweet it says thanks!” How clever is that?

You can’t forget that social is a two-way conversation. To have a successful campaign, you have to know what your audience likes, be smart with the messaging, and time it accurately. Denny’s call-to-action (CTA) was to highlight their food, and they were exceptionally successful when they had you zooming in on a pancake image with syrup and butter.

To have a successful campaign, you have to know what your audience likes, be smart with the messaging, and time it accurately. @SingWeist #SocialMedia #ContentMarketing Click To Tweet

All right, you’ve set your goal. Now it’s time to get the narrative down.

All campaigns should have a common theme that is relatable to their target audience. The messaging they convey draws viewers in, as well as the individuals who should want to share it with their friends. Sure, you can post on every platform to generate more buzz, but know that each platform has a different function and can offer a separate action. So choosing the right platform will dictate the narrative for your campaign.

For the Oreo “Dunk in the Dark” and Denny’s zoom meme, Twitter was more appropriate because it’s a platform that can catch on extremely quickly, especially since a retweet is a lot quicker than a share on Facebook or a repost on Instagram. The main purpose of the campaigns was to be relevant and clever in a short amount of time, and that was achieved. The functionality and behaviors associated with Twitter enabled better execution.

And to contrast, if your campaign requires funding, Facebook provides tabs that allow you to donate, which was key for the tremendously successful ALS Ice Bucket Challenge. Coupled with the fact that Facebook is a more video-friendly platform, the “ALS Ice Bucket Challenge led to 17 million videos made and $220 million raised, according to the ALS Association — $115 million of which went to the association.” The social campaign videos generated over 10 million views on Facebook and 1 billion views on YouTube.

Want to move the needle in a big way?

Look into social media influencers within your industry. Most fundraisers have speakers or partners that will assist them in getting the message out. It is a strategy on reaching the influencer’s followers.

We follow brands that we trust, and when they share the newest skin product or unboxing video of new technology, we want that item too! Why? Because we believe them; their message is clear; and we know that they are honest and trustworthy. That is why we follow social influencers for their advice and knowledge. Teaming up with a social media influencer will allow you to get your message across, in their original brand voice, to their followers.

Think of all the different scenarios in your campaign and find ways to be relevant.

Whether it be a food picture meme to promote your brand or a fundraising campaign that encourages individuals to participate and donate through awareness, being on trend will make you that much closer to being on the hashtag leaderboard. Understand your audience, choose the right platforms, and be concise with your messaging to help you execute a successful social media campaign.

Sing Weist has over 8 years of social media marketing, digital media, and brand development experience. Skilled in measuring and analyzing ROI, and content calendar management across multiple social media platforms for B2B, entertainment, non-profit, education, hospitality, and healthcare companies. She loves being on the cutting edge of social and digital media, as well as traveling, running, surfing, spending time with family, and indulging in: cinnamon rolls, donuts, ice cream, and lots of sweet treats.